Your favorite feline is scratching her neck and head, along with biting furiously at her tummy and back end. What’s making her do this? Most likely its fleas.

Those nasty little bugs that bite and suck the blood of mammals… yuck!

They make us cool cats itch and scratch, and they bother people too!

Fleas Are a Problem Because…

Fleas differ from ticks because they scurry around quickly and don’t hang on long when they bite.

Ticks move slower and stay attached a long time (unless you remove them).

There are over 2,000 species worldwide! The two found on cats and dogs in North America are:

Both types can infest cats, dogs and humans, as well as more than 50 other animals, including raccoons, weasels, opossums and badgers.

What Scientists Say a Flea Is

“Adult fleas typically are about 1/8 inch long, oval, and reddish-brown. They are wingless, and their bodies are very thin, so thin that they can move freely through fur or feathers of their host.

They possess very large hind legs that are used for jumping and a very slender proboscis (beak) that extends forward when [it] takes a blood meal. At rest, the proboscis projects downward and backwards between the legs, but it cannot be seen without the aid of a microscope.

Similarly, recognition of… larvae and pupae typically requires the use of a microscope. To the unaided eye, the legless larvae resemble tiny whitish “worms.”

[The] pupae most likely would not be recognized at all because they are encased within a sticky cocoon covered by incorporated soil particles and small items of debris from the habitat in which the larvae develop.”

Below is a picture showing the four stages of their lifecycle.

The only stage you’ll probably see is the adult, so here’s what you’ll be vacuuming up and getting out of your house… 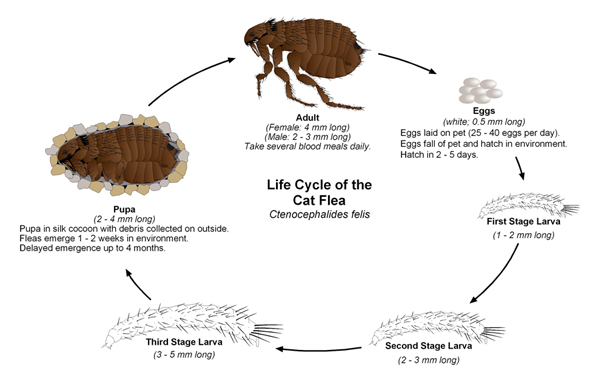 Life cycle of the cat flea
Illustration by: Scott Charlesworth, Purdue University,
based in part on Elbel, R.E., 1991, IN: Immature Insects, Volume 2

Check out this photo of specks on an animal’s fur. Looks like plain ol’ dirt, doesn’t it?

Comb it onto a paper towel, wet it and see if it changes color.

Regular dirt stays brown… Yuck!  But don’t panic. There are many ways to deal with them.

Now, How Do I Get Rid of Them?

Now that you know better what these annoying little critters are in all their stages of life, you’re better prepared to figure out how to combat them both in your home (where most of them are) and on your favorite feline buddy.

Follow my trail at “Getting Rid of Fleas…For Cats Only!” to figure out what’s best for your situation.

Sources used on this website are either primary or secondary.

Primary sources are always preferable and have the most reliable information because they’re original and directly referenced.

Scientific abstracts and data are good examples of primary sources.

Secondary sources are weaker because they usually consist of opinions or articles that give no sources of their own.

However, sometimes they refer to primary sources.

When I use secondary sources, most are those with some authority, such as veterinarian or cat behaviorist books and articles.